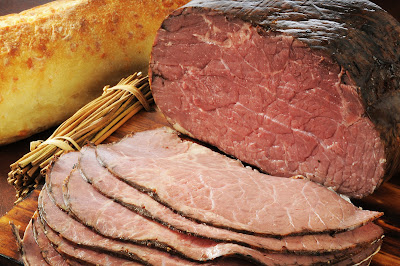 The Canadian Food Inspection Agency has issued a recall for Deli Classic brand seasoned cooked roast beef produced by Mississauga’s Erie Meat Products limited with best before dates from April 10th and April 17th . The recall was first issued back on March 28th for the same product sold at Druxy’s Famous Deli restaurants, but the CFIA is now saying that meat was sold on a much larger scale than initially thought – including in Alberta, Ontario, Quebec, Newfoundland and Labrador, with a strong possibility of it also making its way to other Provinces and Territories across Canada. The CFIA goes on to say that while illnesses have been reported, they’re still in the midst of conducting lab testing to determine just how many of those illnesses are linked to the contaminated meat.

Listeria, also known as Listeria monocytogenes, is food-borne disease-causing bacteria that causes a condition called listeriosis which travels through the blood stream. It is commonly associated with things like deli meat, soft cheeses, unpasteurized milk, uncooked fruits and vegetables, and seafood that is kept refrigerated.

The most common symptoms of listeriosis include fever, muscle/body aches, headache, vomiting and diarrhea. Listeriosis, in rare cases, can also cause blood infections and meningitis. In most cases, symptoms will start anywhere from 1 to 14 days after being exposed to listeria. However, in pregnant women it may take as long as 4 weeks before any symptoms develop. For otherwise healthy individuals, the symptoms of listeriosis are usually mild. However, it can be very serious for other individuals such as those with weakened immune systems, those of a certain age (such as seniors), or women who are pregnant – i.e. causing premature birth or stillbirth.

In order to determine whether or not a patient has listeria, Dr. Ali Ghahary will pay close attention to the symptoms that the patient is exhibiting and will also refer them for blood work as this is generally the most effective way to make a firm diagnosis. Other bodily fluid, such as spinal fluid or the placenta, can also be tested for the detection or non-detection of listeria monocytogenes. If it is confirmed that listeria monocytogenes are present, it can be treated by one of two ways: No treatment, as most people with mild symptoms will not require any medical intervention and their bodies will clear the infection within 7 days. Or, it can be treated with antibiotics. If pregnant, prompt antibiotic treatment (usually via intravenous) can help prevent the infection from affecting an unborn baby. How long you will need to be on antibiotics depends on the severity of the infection itself. For example, in mild cases, patients may need to be on antibiotics for 10 to 14 days, while antibiotic treatment may last as long as 6 weeks in cases where meningitis develops as a result of the listeriosis.

•  Make sure raw foods such as poultry, beef and pork, as well as vegetables, are washed and cooked thoroughly.

•  Wash hands as well as all cooking utensils one you have finished handling uncooked foods.

•  Consume cooked foods as soon as possible and do not leave them sitting.

•  Do not eat luncheon or deli meats unless they are steaming hot.