How Eating Hot Peppers Could Send You to the Hospital

When it comes to healthy eating, we all known that things like fried food, carbohydrates, and sugar are all bad for our health. They can increase the risk of diabetes, cause cardiovascular problems and increase the risk of heart attack and stroke, as well as contribute to significant weight gain – but those aren’t the only bad foods making headlines these days. A 34-year-old man recently made news across the globe after being sent to hospital following a chili pepper eating contest in upstate New York. The culprit? The “Carolina Reaper.” 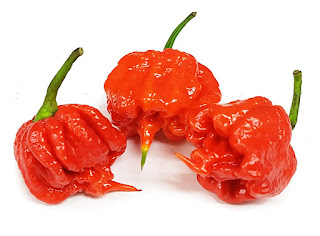 First cultivated in a Rock Hill, South Carolina greenhouse by Ed Currie, the Carolina Reaper was certified as the world’s hottest chili pepper by the Guinness World Records on August 7th, 2013. But just how hot is it? According to the Scoville scale, a pepperoncini is approximately 1,000 units on the Scoville scale and a jalapeno is approximately 8,000 units, while the Carolina Reaper is said to be more than 2 million units – with some even suggesting they’re as high as 10 million units. Regardless, they’re hotter than the average pepper.

So what does it actually feel like to eat a Carolina Reaper? Like many peppers, the heat from a Carolina Reaper starts as a slow burn and may even trick you into thinking you’re out of the woods, but it eventually increases into what can only be described as feeling as though your mouth and face are on fire. Saliva production also increases, and the body will also begin to sweat. Following consumption of the pepper, the man began dry heaving almost immediately. He then developed intense neck pain as well as pain in the back of the head, which eventually spread across his entire head – but it didn’t stop there. Over the course of the next couple of days, he would begin to experience thunderclap headaches. A thunderclap headache is a severe headache in which the onset is sudden and where the pain only takes seconds to minutes to reach its maximum capacity. In many cases, a sudden and severe headache is often a sign of a medical emergency – such as a brain aneurysm – and can be fatal. Luckily this was not the case for the man from New York. However, the pain was severe enough to send him to the emergency room. After running a series of tests, the ER staff were able to rule out a brain aneurysm as the cause of the man’s headaches. They did, however, discover that arteries in his head were constricted and cutting off blood flow, and diagnosed him with a condition called Reversible Cerebral Vasoconstriction Syndrome – also known as RCVS. Its main symptom? Thunderclap headaches as a result of narrowed arteries; and while it’s a condition that has known to be happen as a result of use of certain medications like decongestants, antidepressants and illicit drug use, doctors had never before seen a case where a chili pepper was the cause of RCVS – until now.

Along with RCVS, hot peppers have also been known to lead to other health problems. In 2016, a San Francisco man was sent to hospital with a 1-inch hole in his esophagus after he’d consumed a paste made out of ghost peppers. A ghost pepper is anywhere from 100 to 400 times hotter than a jalapeno, and 10 times hotter than a habanero pepper. Chili peppers can also lead to or worsen heartburn, ulcers, and can even cause the skin to become inflamed.

The oils from the Carolina Reaper and other hot peppers can be difficult to get off your skin, and sometimes scrubbing your hands with simple hand soap and water won’t always do the drink. Instead, healthcare professionals like Dr. Ali Ghahary recommend washing your hands with dish soap. Unlike the average bar of soap, many dish soaps have oil-dissolving properties. Wiping your hands down with a small amount of rubbing alcohol can also get rid of the chili oil. If you’re looking to relieve your mouth and throat of that burning sensation, keep in mind that capsaicin isn’t soluble in water, so if you do drink a cold glass of water and that burning sensation is still lingering, don’t be surprised. Milk is a better, more effective option.

Remember, if you experience a sudden and severe headache, don’t wait to seek out medical treatment, as it could be a matter of life or death. Call 911 or go to your nearest emergency room. For information on other types of headaches, including migraines, click here.
Posted by Unknown at 11:27 PM