Stomach pain is a very common symptom that Vancouver physician, Dr. Ali Ghahary, comes across in patients. It can be caused by many different things for different reasons. 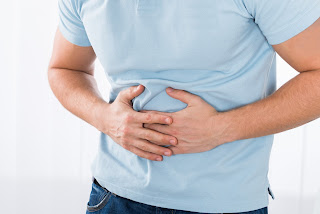 Some of the most common causes of stomach pain include food poisoning, diarrhea, constipation, gas, irritable bowel syndrome (IBS), Crohn’s disease, kidney stones, gallstones and appendicitis. While many of these causes can be treated with medication (and in some cases, surgery), there are many other causes of stomach pain, such as stomach ulcers, that one should be aware of.

Along with having a general feeling of stomach discomfort, ulcers can produce symptoms such as a burning sensation between the chest and belly button, bloating, nausea and vomiting, dark or tarry looking stools, burping, heartburn, acid reflux, and anemia.

There is a thick later of mucus in the stomach that is responsible for protecting it against digestive juices. However, when this layer of mucus is reduced, this allows acid to eat at the lining of the stomach, which then results in an ulcer, and can even cause stomach bleeding. 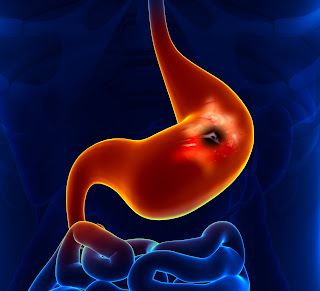 To diagnose a stomach ulcer, your physician may refer you for a series of tests, including tests to rule out a potential H. pylori infection. H. pylori is a type of bacteria that enters the digestive tract which can also lead to peptic ulcers, and even cancer. To rule out H. pylori as the cause of stomach ulcers, you can do a blood test, or may be asked to do a stool or breath test. Another test, such as a barium swallow, is a type of X-ray that is performed when drinking a white liquid known as barium. The barium coats your gastrointestinal tract and allows your doctor and radiologist to see if there are any abnormalities in both the stomach and the esophagus. Another test known as an endoscopy is also sometimes performed, and is done by inserting a thin tube through the mouth and into the stomach. A biopsy may also be performed during the endoscopy so that your stomach tissue can be analyzed in a lab.

Treating a stomach ulcer depends on how severe the symptoms are, though most ulcers are easily treated with over-the-counter acid blocker medications such as Zantac. Your doctor may also write you a prescription for a stronger acid blocker like Nexium (esomeprazole) or Dexilant (dexlansoprazole). Eating a healthy diet can also improve your intestinal tract and give you a better quality of life overall.
Posted by Unknown at 8:22 PM